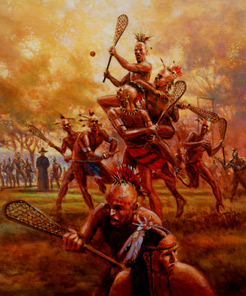 History and Origins of the Sport of Lacrosse

Who invented lacrosse is a common question we hear a lot. The origin of lacrosse was first dated back to the 1600’s, when Native American Indians covered most of North America’s land. French explorers in North America observed the Native Americans playing the game, which rules and setting largely differ from how we play today. The name “Lacrosse” identified the sport, after French explorers were reminded of how similarly the sticks used to play were to the cross that a Bishop would carry, called “le crosier.” Before French explorers gave the sport a name that stuck, the game was referred to as “Baggataway.”

In the beginning of the creation of the game, Native Americans played the sport to appeal to their creator, to settle disputes between different Native American Tribes, and to prepare for war as a ritual. Games were played on fields up to a half of a mile long, with no boundaries and unlimited players. The games would last for days, with players taking breaks from sundown to sunrise. All of the players on the field would fight for the ball, made out of deerskin or wood, and try to score on the opponent. Scoring was identified by the amount of points a team would gain by hitting the stick pole at the end of the field, and kept by the Native Americans who were observing the game.

Lacrosse was prepared for in the same fashion that war was prepared for. Tribes would paint their bodies, players would undergo rituals performed by their tribe’s Medicine Man in order to prepare them to play their best, and sacrifices were made to the creator prior to games. On the day of a game, tribes would perform more ceremonies, including dunking their sticks in spiritual water and receiving a blessing speech from their Shaman, the religious leader.

This was more than a blessing speech as the Shaman would also give a strategic pep talk to the players.

Just like modern games played today, lacrosse also had strict dietary rules. Players were not allowed to eat several things before a game. The Medicine Man of each tribe was not only responsible for preparing the players for the game. He was also responsible for preparing their sticks for the game. The night before game day, the players took part in a ceremonial dance which would be followed by sacrifices. Also, the tribes would yell sacred expressions. The purpose of this was to intimidate the opponents and get the blood rushing in the players.

On game day, more rituals were performed while the teams walked to the field. As a part of some rituals, the players were scratched on their arms or their torso.

Players were required to place a wager on the game, which consisted of a small trinket, jewelry, weapons, or animals that would be given to the winning team or tribe upon completion of the game. After the games were over, after about 20 points were scored by one team, players would participate in a ceremonial dance and then feasted. Many conflicts between tribes were then considered placed behind them.

From Europe, the first people to come across lacrosse were the French. They were Jesuit missionaries who came to St Lawrence Valley during the 1630s. When they initially saw the game, they did not approve of it. According to them, the game was violent. They also opposed the game because of the betting that was involved in it. Also, they were there to eradicate a religion which lacrosse was a part of.

The missionary who gave lacrosse its name was Jean de Brebeuf. He was the first one among the missionaries to write about it. In 1637, he wrote that he saw the Hurons playing ‘crosse’. Even though the missionaries were not fond of the game, their exposure made other Europeans intrigued about the game. By 1740, the game had become a part of the French colonist’s lives as they betted on the game often. However, the colonists could not beat the Native Americans at the game. 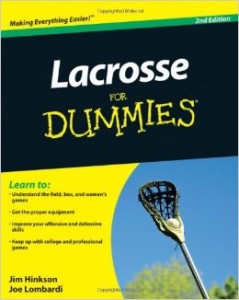 Further Reading: The Best Books on the History of Lacrosse

Flamethrowers is a phenomenal story about a young boy named Kenny who discovers the sport of lacrosse, it's history, and eventually his calling. This isn't a comprehensive history of lacrosse book, but it's a fantastic story that holds meaning for all lacrosse enthusiasts and kids of all ages!

Lacrosse for Dummies is an excellent source for those lacrosse players and enthusiasts looking to improve their knowledge of lacrosse history, rules, positions, plays, and equipment. Quickly leapfrog your competition by reading this lacrosse book! This book is an excellent source for beginners to learn about lacrosse. It gives information on everything from the equipment used in the game to the offensive and defensive strategies. There is also guidance for ‘arm chair lacrosse players’ on how they can enjoy this game on TV or in Print media. Beginners can benefit a lot from this book as it mentions many skill building exercises and also has drills for the starters to follow. 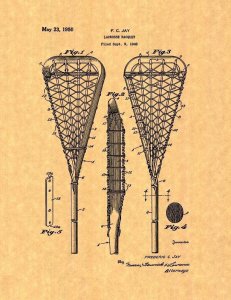 The ball, made of animal hide or wood, was carried by players that fought for it or passed from player to player by a stick crafted from wood. The wood was usually burned and charred, which made it easier to carve into the shape of a lacrosse stick. The sticks were normally 3-4 feet long, with netting made from animal hide at the top, creating a web on a triangular or circular- shaped hook at the end. When trying to score a point, the early version of the sport included a stick marked where a goal was. The stick was divided into three sections, a one, two, and three point section. Players would have to throw the deerskin ball at the stick pole and when hit it, were awarded with the appropriate number of points. Later versions of the game included using large rocks or trees as goals to score into.

The Growth of Lacrosse

The game was expanded and revamped by a Canadian dentist names George Beers in 1856, when he founded the Montreal Lacrosse Club. The group modified the rules of the game as well as the equipment used. Lacrosse became a popular sport among young men, and the first game played with the new set of rules and equipment was played in 1857 at a college in Canada. Shortly after that, Canada named lacrosse its national sport. The game was brought overseas to England shortly after where a game was played between different nations, and expanded throughout England schools as a result. In the late 1800’s, cities in New York also founded lacrosse clubs, and the game continued to grow as a result.

The Sport of Lacrosse Today

Lacrosse continues to be a very large part of Native American culture to this day. Games are played as praise to the Creator, and often referred to as “The Creator’s Game.” Many Native American tribes hold the game to high standards and play as a devotion to their tribe and creator. Lacrosse is played worldwide, with various different countries coming together to play in the Lacrosse World Championships. The game is played at all levels, professional, collegiate, recreational, high school, middle school, and youth levels. Both men and women play the game, through the game varies in rules, field, and equipment. The concept of the game is to score more points than your opponent, and that concept has never changed. The history of lacrosse is one of the most unique stories of all sports played today, which makes it the fastest growing sport in the world!

Women wear eye gear for protection during the game. As for the goalies, they use protective pads and helmets. Even though professional level games are separate, both genders do play together in Intercrosse. In this game, the stick is made up of plastic and the players play with a softer ball than in a regular lacrosse game.

Also See: US Lacrosse Tells the Story of Lacrosse

1636- Jean de Brebeuf was the first to write about lacrosse being played and gave it the name lacrosse.
1740s- European settlers took interest in the game, betting and wagering on games of local tribes.
1757- Farmer and soldier James Smith described watching the game played among local Native American Tribes.
1763- The Ojibwa tribe played a game next to a British fort, now Fort Mackinac, and used the game to distract British Soldiers that they then surprised and killed.
1805- US Army Lieutenant observed the game being played in what is now Wisconsin, and named the city La Crosse.
1834-Caughnawaga Native Americans demonstrated lacrosse in Montreal and interest grew steadily in Canada.
1856- George Beers founds Montreal Lacrosse Club.
1857-First game with new rules and equipment is played.
1860s-Canada names lacrosse as its national sport.
1867-First exhibition game played between nations in England.
1890- The first women’s lacrosse game ever is played in Scotland.
1890s-Girl’s schools throughout England adopted the sport of lacrosse.
1900s-Choctaw Native Americans were observed attaching lead weights to their sticks in order to injure opponents during games, and led to lacrosse being banned in some areas.
1904- Lacrosse became an Olympic Sport.
1908-Lacrosse became a sport at the World Games and dropped from the Olympics
1928, 1932, 1948- Lacrosse demonstrated again at the Olympics, and then dropped.
1930s- Box lacrosse grew rampantly throughout North America.
1937- The first double-sided wooden stick was designed by Robert Pool.
1987- First professional lacrosse team was founded, the Eagle Pro Box Lacrosse League. It is now known as the National Lacrosse League, or the NLL.
2001- First professional field lacrosse team founded, now known as the Major Lacrosse League, or MLL.
Current- Lacrosse continues to be the largest growing sport across the world, gaining governmental regulation by bodies such as the Federation of International Lacrosse. 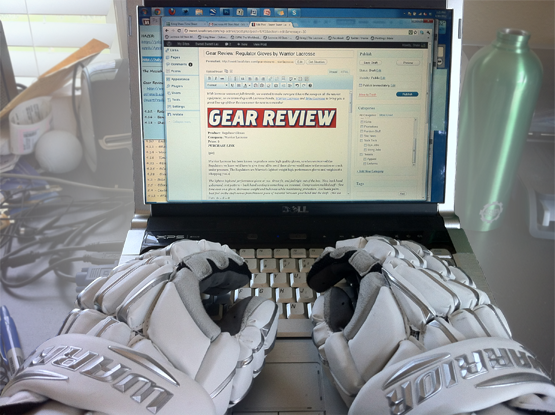 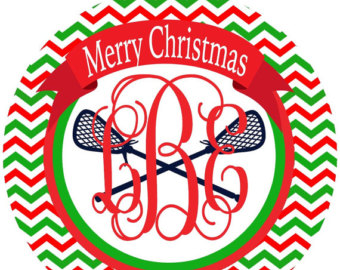 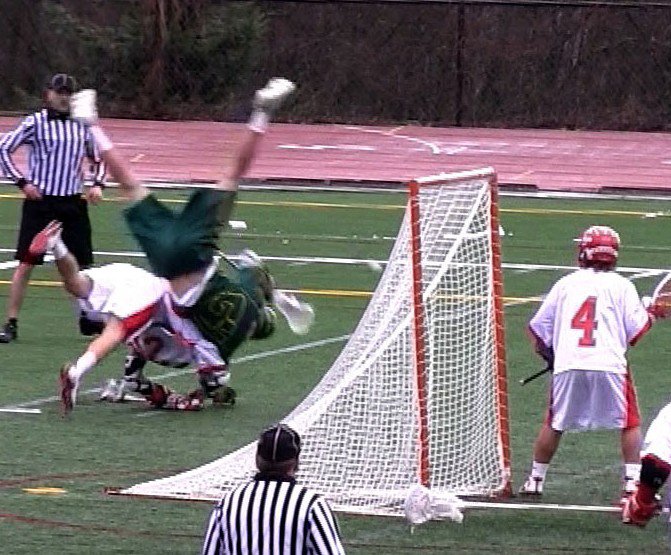